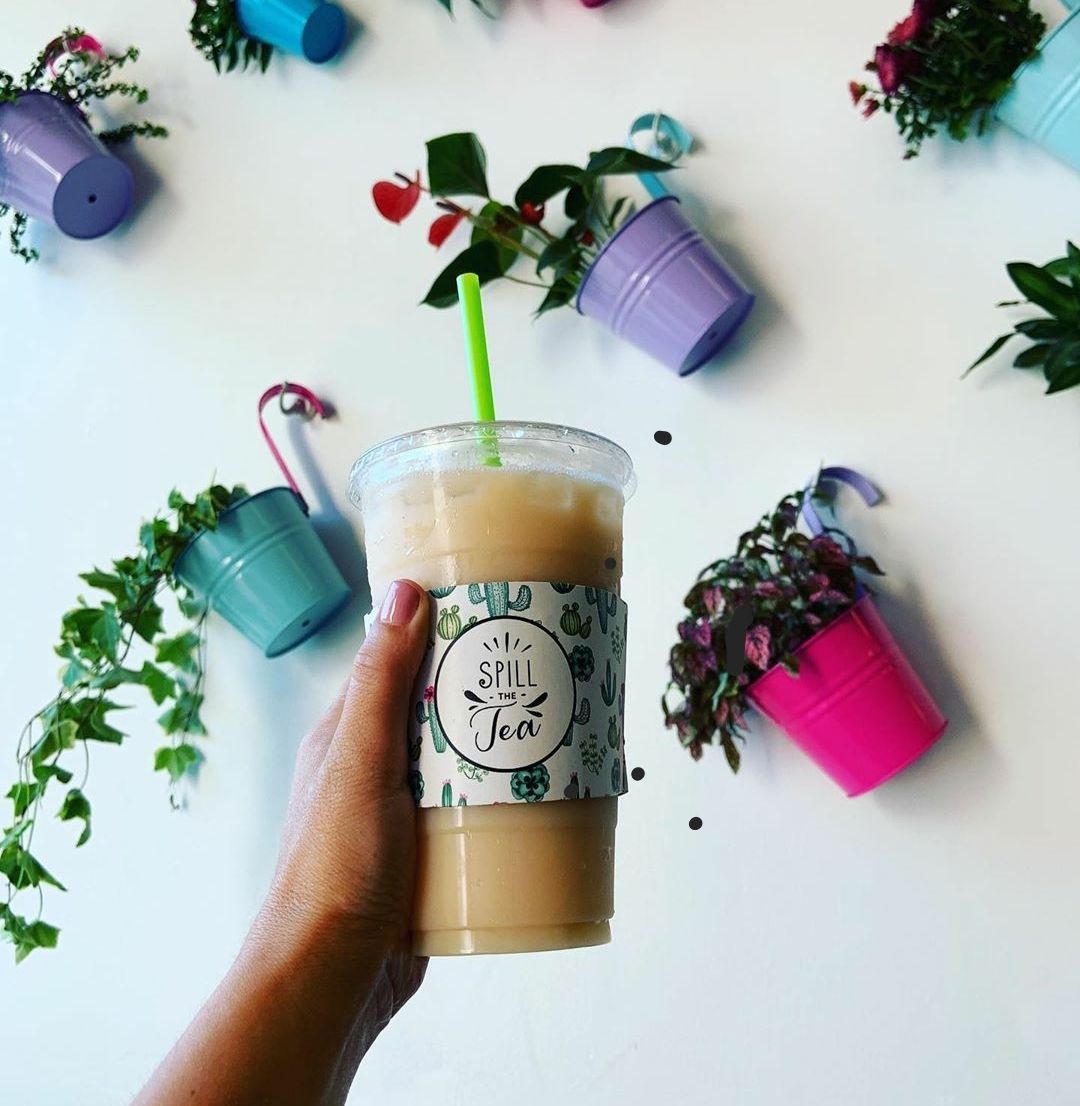 What is Organic Chai Tea? Your Best Friend! [Updated 2020]

Although organic chai tea may not be all that popular in countries like the US and Canada, it has a vibrant history around the world. The name “chai” finds its origins in the Hindi language, and means tea. Chai was initially borrowed from the word “cha,” which is Chinese for tea. Different from its Chinese origins, chai is a term that refers to a mix of spices that come together to form a tea-like beverage.

The recipe for chai will vary across countries, towns, cultures, and even families. However, the traditional ingredients are likely to remain the same. These conventional ingredients include healthy aromatic spices like cloves, ginger, black peppercorn, cinnamon, cardamom, and of course, organic tea.

Most traditional cultures prefer to have the organic chai tea brewed alongside milk, and according to preference, sweetened with honey or sugar. Unfortunately, the organic chai tea that you are going to order from a regular coffee place, will not have much in common with its Indian origins.

Although there is no exact knowledge on the origin of organic chai tea, legends point to it being more than 5000 years old. It is widely believed that the king of modern-day India, ordered a spiced beverage with healing properties, to be used in Ayurveda. Ayurveda was an ancient medical practice that required the use of spices and herbs for healing rituals, and chai tea benefits seemed to fit the bill just right.

The idea was that the heat from black peppers and gingers would stimulate digestion, cloves with its antiseptic properties would help relieve pain. Cardamom, on the other hand, was seen as a mood raiser when consumed, it was also thought that cinnamon helps respiratory and circulation function. At last, the star anise was used to freshen the breath of those who drank the organic chai tea.

Over time, as the organic chai with its healing properties started to spread across India, people began using a vast array of spices to prepare the beverage. Depending on where the drink was being made, from country to even neighborhoods, many additions were being made.

It is also important to note that the regular tea shops you visit may not offer the authentic organic chai experience, due to the ingredients not being fresh. The ingredients are usually found fresh in places like India and other lush regions.

The original versions of the famous spiced tea and masala chai did not contain any Camellia sinensis tea leaves, hard to believe, right? The sugar and milk were also additions that were made much later down the line. Even harder to believe is the fact that black tea leaves, sugar, and milk were made to be popular additions thousands of years later.

It was around the year the mid-1800s that the Camellia sinensis assamica tea plant type was discovered in modern-day India. The plant was heavily cultivated by the occupying British, who were ruling the continent at that time. It is no secret that the British have a fierce appetite for black tea, which is strong in taste, coupled with sugar and milk, who would have thought?

What is Chai Made of?

As you might know by now, the ingredients for chai tea will vary from culture to region. You will have a hard time finding the absolute original recipe, because whomever you ask, is likely to claim that they use the traditional flavors. This does not mean, however, that you will never get a chance to taste real organic chai tea. Regardless of modifications, the core elements are likely to stay the same, and they are written down below. 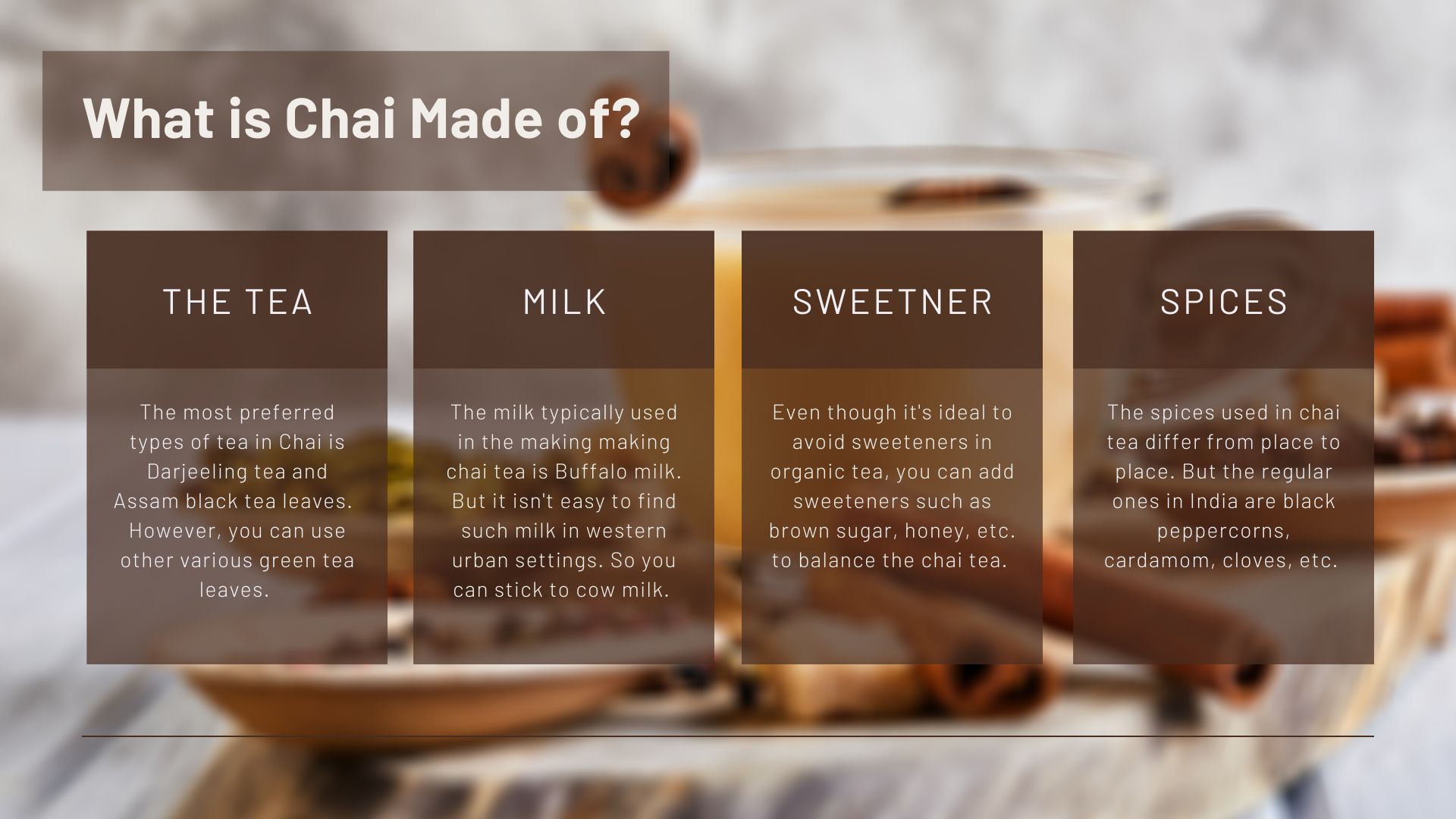 Darjeeling tea and Assam black tea leaves are the most preferred tea types to use in the chai. The leaves are mostly native to India if you do not have access to the leaves mentioned above, no need to worry, because you can also use various green tea leaves. More specifically, South African red rooibos herb, and the South American yerba mate herb. If you are unable to get your hands on any of the tea bases, you should not worry either, because you could also consume the drink with a blend of spices and herbs. This spice mix, however, will not contain any black or green tea.

The milk used in the chai tea from India is typically buffalo milk. Since buffalo milk is hard to come by in more urban western settings, you will have to be satisfied with cow milk. If you prefer to be a rebel and go all out, there are plenty of alternatives like coconut, soy, almond, and rice milk. But it does not have to end there, because some people like to mix goat and yak milk with their chai drinks. Do not have your hopes up too high because you will probably not be coming across yak milk and organic chai tea in any specialty coffee shop.

Depending on where you are enjoying the beverage, some recipes require you to first prepare the chai in hot water, then thin it out by adding milk to the mixture. You could also have the option of making the chai with a mix of milk and water, while on the other hand, you could go all out with just milk.

It is highly recommended that you enjoy organic tea with all of its glory and avoid adding anything like sweeteners. But if the taste becomes too sweet, you will have to add something to balance things out. The most common sweeteners for chai tea is brown sugar, regular white sugar, and honey. You can also get funky and use turbinado, demerara, and even coconut. In India, Jaggery, which is unrefined cane sugar, is more preferred. Most organic coffee shops across the US are likely to have such sweeteners on standby in case you have a hard time finding them. 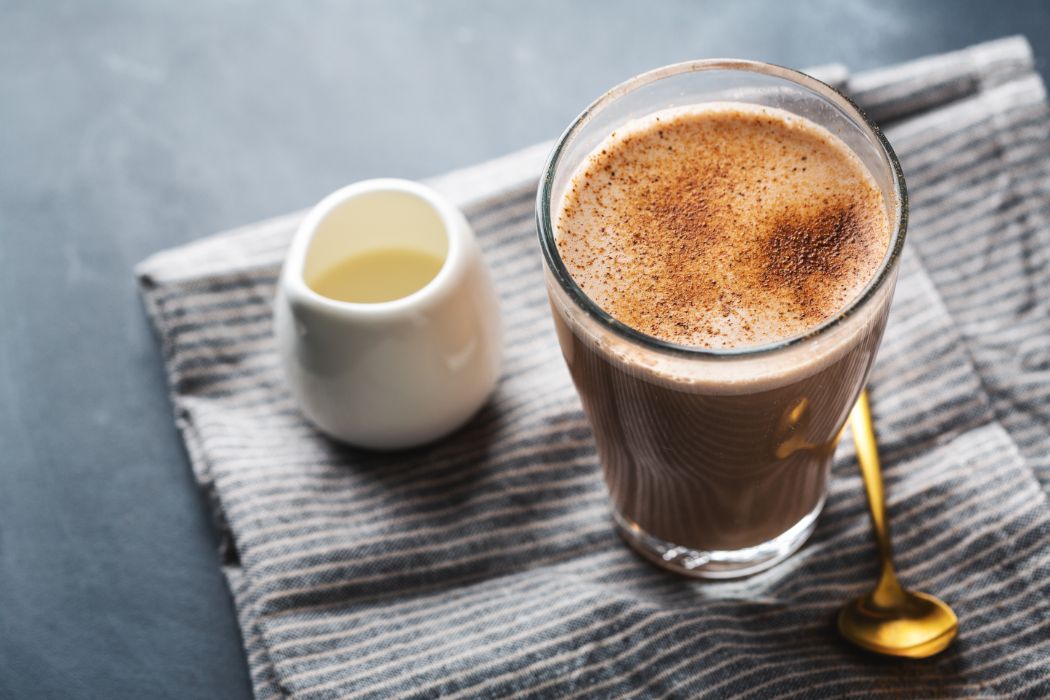 By now, you should already be familiar with the core spices or “masala” used in organic chai tea and know that they differ from one region to another. Since black peppercorns, cardamom, cloves, ginger, and cinnamon are found all over India, they have become the norm for Indians who want to enjoy chai tea. Other additions like nutmeg, vanilla, fennel, and star anise may also be used as a traditional recipe for the tea. Chai tea benefits are also over the moon due to the number of natural spices and herbs used in the preparation process.

Since the love for chai tea has traveled far from its homeland India, it has also reached many households and cafes in the West. Spices such as saffron, bay leaf, allspice have grown to attract more westerners to the chai. So much, so that cumin and coriander have also found their way into chai tea recipes. If you live in Los Angeles, and on your search for the best milk tea in Los Angeles, you might even come across chai tea latte, making it as western as it gets.

Whether you are looking to relax, get a taste of India and its herbs, or even grab an organic chai tea latte, you will not be disappointed. With a thousand-year-old recipe still being enjoyed to this day, there is not much left to say about the wonders of the chai tea. The more than perfect harmony of spices and flavors, are sure to spark a fiesta right around your taste buds!

If you want the best place to enjoy your chai tea, come to Bontea. We offer delicious tea, coffee, smoothies, wellness drinks, and waffles that will amaze you! We also provide the best place for you to relax with your friends while enjoying your favorite tea.

Visit us with your families and friends at 7275 Melrose Avenue, Los Angeles, CA 90046, and you’ll not be disappointed. There’s also another option to order online. We make sure that you get your delivery on time. If you have any inquiries, please contact us, and we will gladly assist you.

Come for the art, stay for the taste! 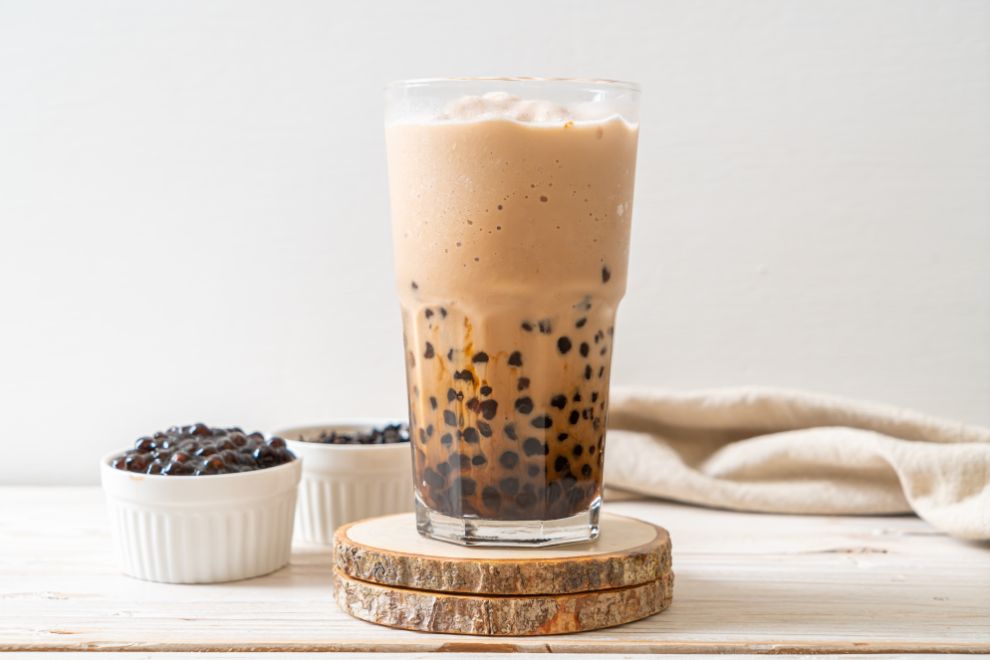 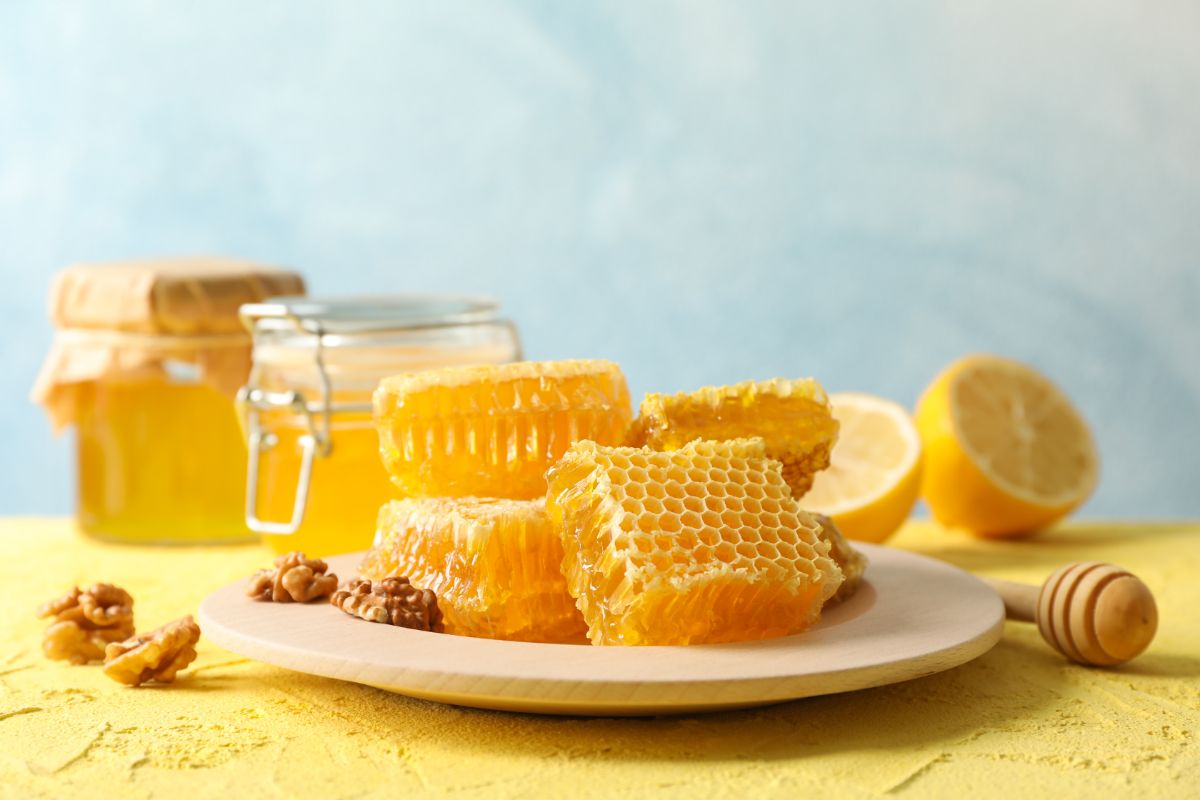 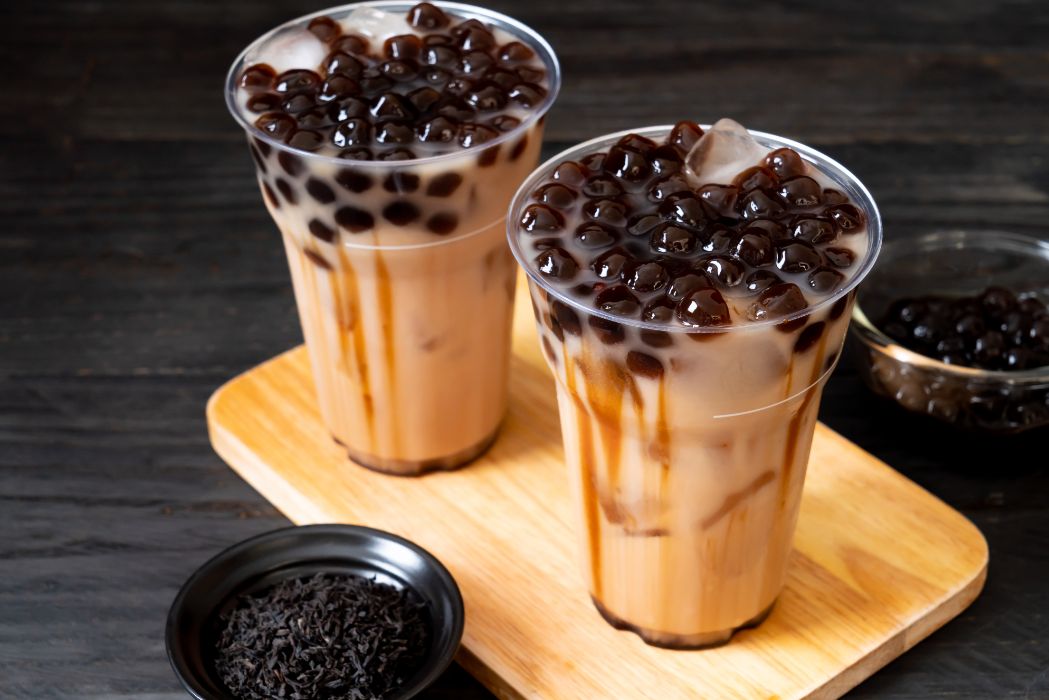